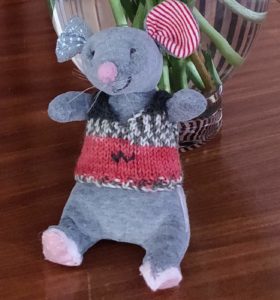 Wesley mouse LOVED Harvest Festival. In fact, he loved any occasion that had the possibility of food. But Harvest – well, it was sort of bringing the ‘outside in’ and this year, he was sure, would be no exception.

Pitter patter, pitter patter – Wesley mouse scurried from his secret hiding place in church to the Youth Hall for his usual Thursday ‘healthy supper snack’ of crushed breadsticks, raisins and banana. “DE- LIC- IOUS,” he said to himself, as he smacked his lips and wiped his whiskers. Being small, he was ridiculously full after refuelling on the delicious leftover toddler snacks. He adored Toddlers – such busy little people, full of fun and mischief – just like Wesley! Oh, how he wished he could join them on the slide or press his paw prints in the play dough, but Wesley knew his place and would watch gleefully from the side lines.

Now Wesley always slept well on a full stomach and couldn’t imagine having it any other way. In fact, there were times when Wesley knew he’d over eaten and found his mouse hole home in the skirting board just a little bit tighter.

“Never mind, a few more grams on an active little mouse isn’t going to harm.” Wesley murmured as he snuggled down in his nest.

As he drifted off to sleep, he dreamt of all the food he would see (and eat) this weekend. There would be cheese scones, fruit scones and perhaps some crumbly biscuits at the Coffee morning. Then there was the Ploughman’s Supper to look forward too – pork pie, crusty bread, cheese, apple pie – oh, how delicious! He would avoid the celery sticks and pickled onions though as he could never really get to grips with them.

Now Wesley was keen to try all things but he was slightly concerned about something advertised as a ‘C E I LI D H ?’.” (pronounce Cilid h ?)

“What does that say? “Wesley puzzled. “Do those letters actually make a word?”

C- E- I- L-I – D- H? Hmmn, Wesley enjoyed word puzzles but this was a mystery. Still, he was sure to solve it eventually.

Now on Friday, Wesley had an easy day. He’d gathered a few little snacks early on before the cleaner came in and stored them away for later. The church was quiet and peaceful and Wesley had a bit of a ‘pyjama day’. Little did he know of the excitement ahead.

Today, Saturday, he awoke to the sound of ladies’ voices chattering and laughing. He watched eagerly as beautiful flowers were brought into church – yellows, golds, rich Autumn colours. They brought a loaf of bread too and placed it carefully on the table at the front of church. Wesley spied the ladies snipping away at the stalks and branches, then arranging them beautifully to adorn the church. Within what seemed no time at all, the church was transformed into a golden glow of harvest colours.

In front of the table in church were also placed 7 white cards, each with a different letter …

In the Church window, where Wesley sometimes waved to passers-by, appeared a sheaf of golden corn, along with miniature tractors and farm vehicles in celebration of the harvest from the fields.

“The outside’s definitely coming in this year,” thought Wesley.

But Wesley was about to get a HUGE surprise because, snuggled inside the sheaf of corn, hanging on for dear life, was Wesley’s country cousin Harvey (the Harvest Mouse)!

“Whooah! “Exclaimed the two mice in unison” What are YOU doing here?”

Harvey jumped out of the corn, up the stairs and greeted Wesley.  Now Harvey had never been to Church before and he didn’t know what to do or where to go, but Wesley knew his way around and after a quick guided tour, they soon settled in to watch the Ceilidh – whatever that was.

“We’re going to have fun tonight!” the mice agreed.

Musicians arrived with different instruments. Some instruments to squeeze, some to strum and some actually tucked under their chin!

“Oh this is amazing!” Harvey exclaimed as the two little mice watched the stampede of feet trying to dance to the music.

“So, THIS must be a Ceilidh!” announced Wesley. “I’m loving this.”

The Ploughman’s Supper was enjoyed by all, but Wesley had to remind Harvey not to make an appearance yet. It wouldn’t be appreciated.

“Just wait Harvey, there will be enough for us too. Just you wait and see.”

When the music stopped and everyone said their “Goodbyes”, Wesley and Harvey feasted on their own Ploughman’s Supper before scurrying into Church. Harvey began to feel at home as the scents of harvest filled the room. Wesley explained to Harvey that tomorrow we would celebrate church Harvest Festival. We thank God for all the good things he provides for us – the crops that go to make food for us to eat, for fruit and vegetables, for the farmers who grow them, for the fish in the sea, forALLwe have. God provides for us all.

The little mice still had energy for a game of Cat and Mouse (but without the Cat!) and chased and chased. That’s when disaster struck!

Harvey, not being used to such a confined space, sped across the front of church, skedaddling the cards that spelled H A R V E S T at the front of Church!

“Oh no!” exclaimed Wesley. “Look what’s happened! They’re scattered all over! Come and help me!”

Wesley and Harvey scratched and scraped at the cards until they had them lined up – well most of them.

“What does that mean?” said Harvey.

“Well”, explained Wesley, “Starve means being very, very hungry and not having enough food to keep well. The crops that are grown on your farm go to make food and that is sold in the shops. Sometimes, difficult things happen to people and they don’t have the money to buy food. Then they are hungry. It happens all over the world. It happens here in Great Ayton, Stokesley and Middlesbrough too. “

The little mice partnered again to re arrange the letters into the correct order, more determined than ever to replace the word…

“Is it right now?” asked Harvey.

“No, it’s still not right!” said a worried Wesley. “It says ‘Share’. But do you know what Harvey? I think there’s a lesson here. We started with HARVEST – that means all the good things that are grown to make into food for us to eat – there is plenty for everyone. But sometimes it doesn’t get shared out equally and some people go hungry. Out of the one word we got STARVE and then SHARE. At the Harvest Festival tomorrow, this table here will groan with the weight of tins of food and packets of cereal and all good things because the humans need to help others who are hungry. Right here in this area! All the food will go to the Foodbank and they will give it to people who would otherwise be hungry. Do you know what Harvey, some people don’t know or have forgotten what it feels like to go to bed feeling too full. Evenwedon’t go to bed hungry!”

Jesus said we should look after and care for each other even when we don’t know them.

We need to share what we have and give what we can because there really IS enough to go around. We just need to SHARE it.

The two little mice worked hard to use ALL the letters to remake the word HARVEST at the front of church and later, in the silence of the night, tiptoed off to bed. Nobody would ever know that Wesley and Harvey had solved word puzzles.

So, Harvest was celebrated. The band and the organ rang out. The people sang and raised their hands in praise to God for all his goodness and provision. The table was indeed laden with goods and The Foodbank would be able to help more people.

Harvey had spent a very exciting weekend with Wesley – he’d gone to church for the first time, he’d had food and fun, he learnt what happens to the crops from his fields and how important it is to share what we have.

In the Bible, there’s a book called’ Matthew’ and in Chapter 25, Jesus explains that when we help other people when they are in need, it’s just like helping Him!

Now that IS special!