Wesley and the Banquet 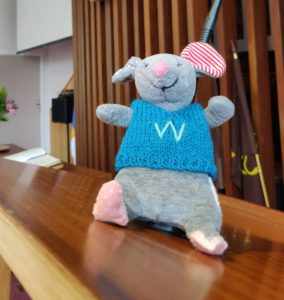 Crash! Bang! Wesley did not need an alarm clock when Pete’s drum woke him from his slumber. The worship band were in early to run through this morning’s songs.

‘Ooh!’ yawned Wesley, as he rubbed his sleepy eyes with his tiny paws,” I’ve overslept again!”

Wesley scurried his way back to the tiny gap in the skirtings near the choir vestry when Pete turned his back for just a second. Wesley had nestled down to sleep in the cushion tucked inside Pete’s drum last night when the church was quiet and still and now the band are tuning up before the service. It seemed to be a perfect place to sleep- so cosy and warm (it can get quite cool in church at night).

Wesley had been particularly tired after a busy evening looking for supper. He could usually find something to nibble on (the old vestry curtains were always a good standby), but last night Wesley had run all the way to the Youth Hall to clear the carpet of a few tiny scone crumbs left from the Coffee morning. A sultana and a morsel of cheese scone was the perfect midnight feast!

From his secret hiding place, Wesley had a good view of all the comings and goings in the church before the morning service. This morning Wesley was keen to see the contents of a paper bag which was being carefully opened and then its contents, two bread buns, were put on a shiny plate and placed on a table at the front of church. Next, tiny glasses were filled with a rich, red coloured drink (about the colour of red wine). They, in turn, were placed carefully next to the bread and then covered with a starched white cloth. There seemed to be something quite special about the way it was being prepared – as if it was the most amazing meal, lovingly prepared – but yet it was so simple – bread and wine. Wesley was puzzled.

Wesley, being quite a greedy little mouse, was really quite excited at the sight of bread because it usually meant crumbs! And crumbs to a mouse was another tasty treat. He decided to watch carefully.

The service was about to begin. Lots of people came into the church and sat down. The band played, people sang, people spoke, there was some laughing, some thinking times, some quiet times. More singing. There were children too with  smiley faces and bright eyes, eager to learn about a man called Jesus. It was a lot to take in and Wesley didn’t understand it all, but he listened as carefully as his over- sized ears would allow him.

Now, what happened next was really rather special.

Rev Lisa moved to the table and ever so carefully removed this special cloth to reveal to everyone the contents hidden underneath. Wesley watched carefully from his secret place.

“Are they going to share that food and drink? He puzzled,” because I don’t think there’s enough for all those people. They’ll just get a mouse size meal and that won’t be enough for humans!”

Nobody seemed to share Wesley’s concern. The Church was quiet of its whisperings and a sort of ‘peace’ filled the room as only one voice was heard.

Wesley did not move or make a squeak.

Rev Lisa read from a special book called a Bible (Wesley had heard of it many times and I think had nibbled a few!) She read about Jesus sharing bread and wine with his friends and Jesus told them he had to leave them, but from then on, every time they shared bread and wine in this special way, they could remember him and how He loved them beyond measure. The bread represented Jesus’s body that would be broken in a terrible way and the wine represented his blood that would be spilled. Jesus would die so that all people could come to know God and know without any doubt that they are loved. It was the saddest and yet most precious story.

It was too much to take in. (Something that we need reminding of time and time again).

“ …We are not worthy even to gather up the crumbs under your table ..” the people prayed

They’re talking about crumbs under a table! Surely that’s for me! thought Wesley!

“ But it is your nature always to have mercy and on that we depend.”

With outstretched arms everyonewas welcomed to share the feast. The people stood up and quietly made a huge human circle around the inside of the church. One by one, each person offered open hands to receive a morsel of bread from Rev Lisa and then a tiny drink.

“Broken for you. Shed for you. “they were told.

They really were mouse-sized portions and yet.. and yet the humans seemed to be filled. It was indeed a very special time.

Wesley had watched with eager anticipation as the food was served. He spied minute crumbs drift to the floor, too small for the human eye, but Wesley would wait patiently and collect them later. There would be enough for him too.

As the tiny glasses were collected, Wesley watched silent heads bow in thought and prayer. The empty glasses placed on the table next to the empty shiny plate and the starched cloth gently covered them again. All was well.

And the people gave thanks to God. They had ‘met’ Him and in this special time had been given the promise of a far more splendid ‘heavenly’banquet to come prepared for all.

But in the meantime, Wesley was eager to keep busy in the church and later, after everyone had gone home, would feed on the crumbs under the table.

This website uses cookies to improve your experience while you navigate through the website. Out of these, the cookies that are categorized as necessary are stored on your browser as they are essential for the working of basic functionalities of the website. We also use third-party cookies that help us analyze and understand how you use this website. These cookies will be stored in your browser only with your consent. You also have the option to opt-out of these cookies. But opting out of some of these cookies may affect your browsing experience.
Necessary Always Enabled
Necessary cookies are absolutely essential for the website to function properly. This category only includes cookies that ensures basic functionalities and security features of the website. These cookies do not store any personal information.
Non-necessary
Any cookies that may not be particularly necessary for the website to function and is used specifically to collect user personal data via analytics, ads, other embedded contents are termed as non-necessary cookies. It is mandatory to procure user consent prior to running these cookies on your website.
SAVE & ACCEPT